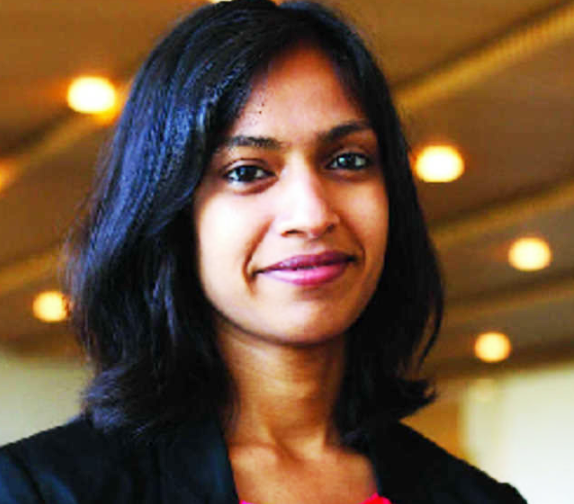 
PANAJI: The next 'in' feature for your smart phone might very well be gesture-recognition and it is a young Goan who is behind the innovation. The creation is set to make touchscreen technology passé and would allow users to interact with their devices through thin air.
Native of South Goa's Velim, Andrea Colaco, has not only earned a graduate and master's degree, and later earned one of the most-sought after doctorate seats at the prestigious Massachusetts Institute Technology (MIT), but has earlier this month won the MIT $100K entrepreneurship competition for her innovation which provides real-time, millimetre accurate 3D gesture sensing on devices like mobile phones.

"What is the next interface for cellphone devices? It is gesture recognition. Every cellphone-device manufacturer is scrambling to bring gesture-recognition into their devices. This is an immediate and unaddressed market," Andrea said.
The innovation was presented at the competition as '3dim' solution, set up by Andrea with co-founder Ahmed Kirmani. It achieves high-quality 3D sensing by employing patented signal processing methods invented at MIT by the co-founders.

"Now with the prize money, 3dim will go full steam. We will develop the technology for customers-smart-device manufacturers-who have already expressed interest in the product," she said.
The Goan's business idea made the most financial sense for the panel of entrepreneurs, venture capitalists, scientists and industry professionals judging the eight finalists of the over 3,000 participants.

Andrea's success though had seemed certain from the early years. The student of Margao's Fatima Convent High School had ranked second at the Goa board Class X exams in 2001 and two years later topped the Class XII exams with an impressive 96.17%. Her record of cent percent score in physics, chemistry and biology remains unmatched till date.
"The need for power-hungry, specialized hardware has kept such technology from mobile devices-problem that has now been rectified," Colaco, a PhD student at the MIT Media Lab, said during the winning pitch at the competition to a packed auditorium.

She said her prototype only demands a few milliwatts of additional power from the phone-about one-seventh of the amount used by a standard smartphone camera.
"I am thrilled for Andrea and her recent win in the MIT $100k entrepreneurship competition. I had been talking with her over the past few weeks and knew about the preparation involved. While she said her competitors were strong too, I was confident the final would be hers. She has always been an ambitious person with attention to detail," her mother Antonette, a homemaker, said. Andrea's parents are presently based in Doha, Qata, where her father, Aldavid Silverio, is an assistant finance manager with a French company.

Andrea's older sibling Gresner is an IT engineer and is based in Cincinnati USA.
The youngster's passion also lies in promoting hands-on design and prototyping skills in undergraduate programmes in India and she has organized and taught at two such workshops in India, at Pune and New Delhi.
Andrea is a recipient of the Goa scholars award 2010 and has a masters degree in media technology from MIT in 2010, after completing her undergraduate degree programme in electrical and electronics engineering from BITS, Pilani in 2007.

After passing std. XII through our higher secondary school , completed B.E. in Electronics and Communication College from Bangalore. First fighter Pilot for Air Force from Goa after 1971. Is under training at Air Force Academy, Hyderabad.

After passing std.XII through our higher secondary school,completed Diploma in Production Engineering . After working for one year entered into business and is presently the owner of Shinde Packaging at Verna, Sancole and Kakoda and also of Shinde Developers and Shinde Logistics. Presently president of verna industry association.

A student who secured second rank at Goa board in std. XII through our higher secondary school and completed B.TECH in Chemical and Bio-Engineering through NIT Jalandhar and post graduate programme in management through Indian school of Business,Hyderabad,presently placed with DELOITTE ( USA) and working as strategy and operation consultant.


A student who secured first rank at Goa board in std. XII through our higher secondary school and completed B.E. in Electrical and Electronics Engineering from BITS PILANI , presently pursuing Masters in Radio Communication at Aalto University, Finland. Awarded Dhirubhai Ambani Scholarship and Goa scholar.

A student who secured second rank at Goa board in std. XII through our higher secondary school and passed B.E.. in Computer Science through Bits . Worked on Multi-Agent systems at University of Augsburg – Germany. He is a software developer.

After passing std. XII through our higher secondary school, completed Ph.D in physical science through Goa University. She has received best AMATEUR ASTRONOMER AWARD, RESEARCH SCHOLARSHIP of Goa University. She has to her credit many publications in National and International Journals and her presentations at National and International Conferences. She is on executive committee of many rganizations promoting science. A student who secured second rank at Goa board in std. XII through our higher secondary school and presently enrolled for D.M. at Institute Of Hematology and Transfusion Medicine, Clinical and Research Institute , Calcutta. Winner of Dhirubhai Ambani Scholarship, Goa Scholar, V.M.Salgaonkar Memorial Award, Gold Medal for best graduate, Torrent Young Scholar Award, first at zonal level and second at all India level, has three International Publications. Was in the merit list of post graduate entrance examination at PGI Chandigarh, Aiims, Cmc Vellore.

A student who secured first rank at Goa board in std. XII through our higher secondary school and completed B.E. in computer science through Bits and master in Computer Science through University of Texas, Austin. He is NTSE Scholar, Dhirubhai Ambani Scholar, Goa scholar, K.C. Mahindra Scholar. He received Maharashtra and Goa state talent search scholarship, German academic exchange fellowship. He is software developer in windows in Telemetry team at Microsoft.